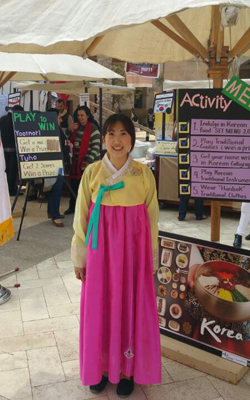 I am from South Korea. I did my undergraduate studies in Arabic and International Studies. I did my study abroad in Jordan for a year in 2013 where I stayed in the house of my Jordanian friend who was my roommate back home. She gave me my Arabic name "Hanadi," which I have been using ever since. Now even many of my Korean friends call me by that name. I love how people react when they ask me in coffee shops what my name is and I tell them  'Hanadi.”

Why did you choose to study the Middle East?

The reason I initially chose Arabic as my major was because I was interested in women's rights in the region. Being ignorant, I thought women in the Middle East had to be, somehow, ‘helped’ by other more privileged people, however, the more I learned, I realized how ignorant I was and that these misconceptions are deep-rooted and need to be further understood and analyzed. As I was studying the culture, politics and economics of the Middle East region in general, I became more interested in Middle East foreign affairs. All the news we hear in the media outlets on the Middle East, especially in Korea, were on the foreign affairs issues, and I could see that many of the news media in Korea were not taking a more holistic approach but were rather biased. I wanted to learn more and eventually become a bridge between South Korea and the Middle East.

What are the benefits of pursuing a MEST degree in Cairo?

I chose AUC because I wanted to do my MA in the region, and study the region from a non-western perspective. Although I expected to have more daily experiences living in the city, living in New Cairo does not give me as much chance as I've expected. However, daily experiences I have on streets, in cabs and cafés all motivate and shape my studies and thoughts on the Middle East. Coming from Korea where the view on the Middle East is so narrow and limited, it is an amazing experience to live in Cairo and tell my friends, family and colleagues back home how it really is. I am also very into Instagram and I am not embarrassed about it. Although pictures would not tell everything, many of my friends have changed their stereotypical ideas they had on Egypt looking at the pictures I post.