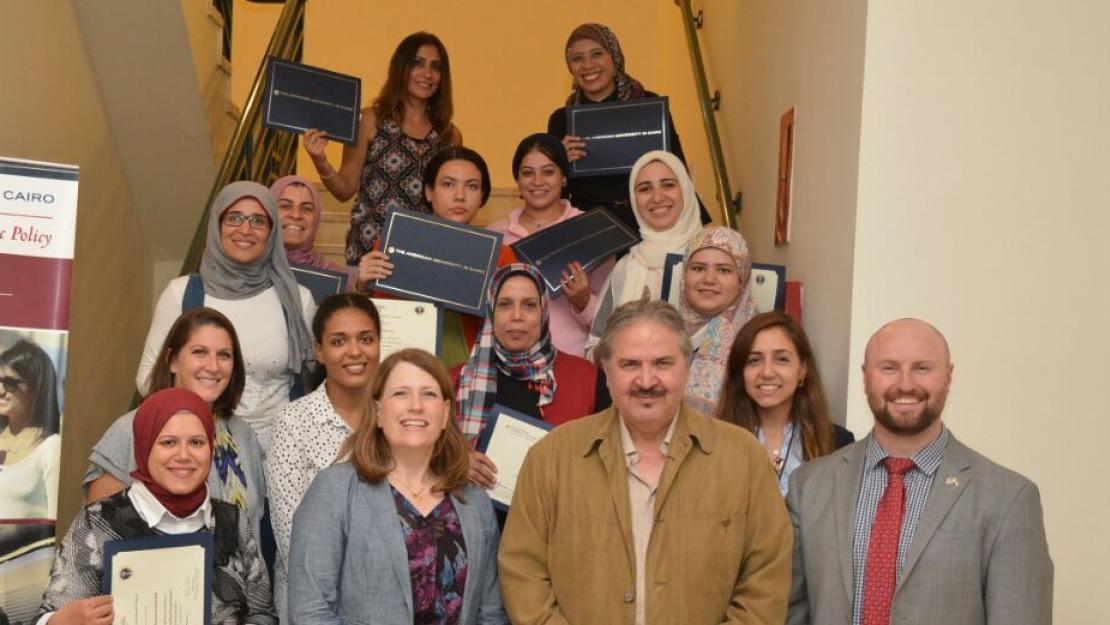 The Kamal Adham Center for Television and Digital Journalism in the School of Global Affairs and Public Policy at the American University in Cairo together with the US Embassy in Egypt held their fourth joint event under the Virtual Speaker Program (VSP). The VSP brings experts in digital media, journalism, and other fields to speak and interact directly with students and professionals in a videoconference setting. This video conferenceas different in that it offered a one-day practical workshop titled “Audio Storytelling Through Podcasts” delivered by Kerry Donahue, former director of the Radio Program at Columbia University’s Graduate School of Journalism and current director of training at PRI/PRX, who traveled to Egypt to give the training to Adham Center graduate students as well as professionals in the radio field.

Donahue introduced the concept of podcasting and the evolution of the industry in the past decade. She also coached the participants through the process of writing, recording, and editing for the ear, as well as means of distribution and marketing. The participants were then given the chance to record their own audio trailers in groups and their recordings were critiqued by their colleagues.

Dr. Hussein Amin, Director of the Adham Center, together with Maxwell Stoneman, US Embassy in Cairo’s Press Attaché, and Kerry Donahue, gave out certificates of attendance to the workshop’s participants.

The Virtual Speaker Program (VSP) is an ongoing collaborative initiative between the Adham Center and the US Embassy with the purpose of highlighting new media and digital journalism practices to the global audience, promoting positive, people-to-people knowledge exchange.

About the trainer: Kerry Donahue is an experienced radio producer and former director of the radio program at Columbia University Graduate School of Journalism. Her work has been heard on PRI, PRX, NPR, WNYC, WBGO, and Marketplace. A former executive producer at WNYC, Kerry was part of the team that launched The Takeaway with John Hockenberry in 2008 and was the executive producer of “Pop & Politics with Farai Chideya". She was an early podcast pioneer in her role as a producer of original content at Audible.com, a subsidiary of Amazon and the leading site for downloadable premium audio content.