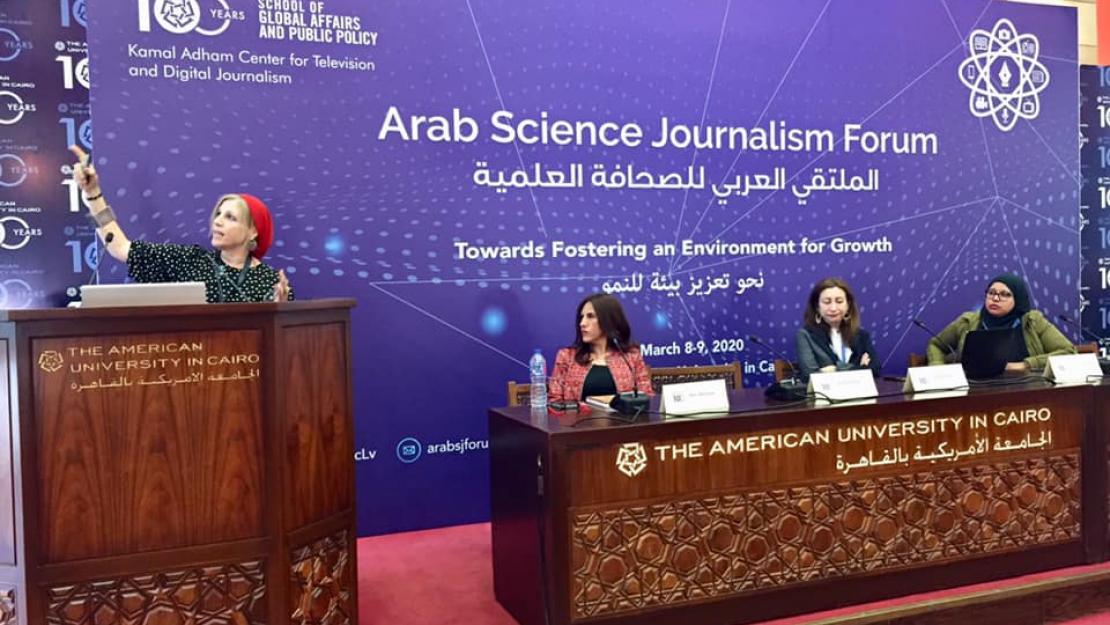 On Sunday, June 27th, 2021, the the Kamal Adham Center for Television and Digital Journalism in the School of Global Affairs and Public Policy at the American University in Cairo hosted the Third Arab Science Journalism Forum: Advancing Science Communication in Challenging Times. The forum, which was accompanied by a special issue of our journal Arab Media & Society on “Media & Health”, presents the Kamal Adham Center’s latest project to further the development of this important field in the Arab region.

Since 2019, the Center has placed a focus on advancing science journalism across scholarship, education, and collaboration in an effort to build this underrepresented field. This year, the Forum included four sessions tackling various areas of journalism and communication in the context of the current global climate with top international science journalists, scholars, stakeholders, and government and nongovernmental officials coming together to share experiences and knowledge. In addition to keynote speeches, interviews and featured content, the Forum included four sessions on the following topics: Communicating Science in Times of Crisis, Communicating Science and Health through Art and Entertainment, Global and Technical Perspectives on the Future of Science Journalism, and Vaccines and Public Awareness.

Last year On March 8 and 9, the Kamal Adham Center for Television and Digital Journalism, in the School of Global Affairs and Public Policy, together with the Office of the Associate Provost for Research, Innovation and Creativity, organized the Arab Science Journalism Forum, titled Science Journalism: Towards Fostering an Environment for Growth.

The forum’s activities also included a strong lineup of speakers and research paper presenters participating in a variety of sessions including panel discussions, workshops and paper presentations. Topics addressed included how the media coverage of the current COVID19-Coronavirus is being digested by the public in Egypt; how scientific literacy is key as a means to combat the constant flow of rumors and misinformation in scientific fields; the relationship between science and religion as is portrayed in the media; how freelance journalists can better prepare for covering science-related topics; the role of data analytics in making sound journalistic decisions; how digital content platforms are investing in and presenting issues relating to science and medicine to the general public; how niche publications such as SciDev, Nature, and others can simplify the sciences to cater to the general public; in addition to a status report on the perceptions, consumption and content pursuant to science journalism in the Arab world. The speakers also addressed key issues such as new media, artificial intelligence (AI), virtual and augmented reality, and the ethics associated with them when presenting science-related content. Capacity-building needs and other challenges facing this growing field in Egypt, the region and the world were also addressed.

The Forum also featured a Science and Innovation Walk under the Moataz Al Alfi pergola, where different science and journalism related entities displayed their work and activities. Exhibitors included: Popular Science, SciDev, Nature and For Science (“Lelem”); the Egyptian Knowledge Bank; the Egyptian Ministry of Education and Technical Education; Egypt Independent; Al Ahram and WE telecommunications.

The forum was well attended by faculty members from AUC and other national and private universities, students, media professionals and journalists. It received wide media coverage in both digital and print media.

You can watch MBC Masr 2's coverage of the event here