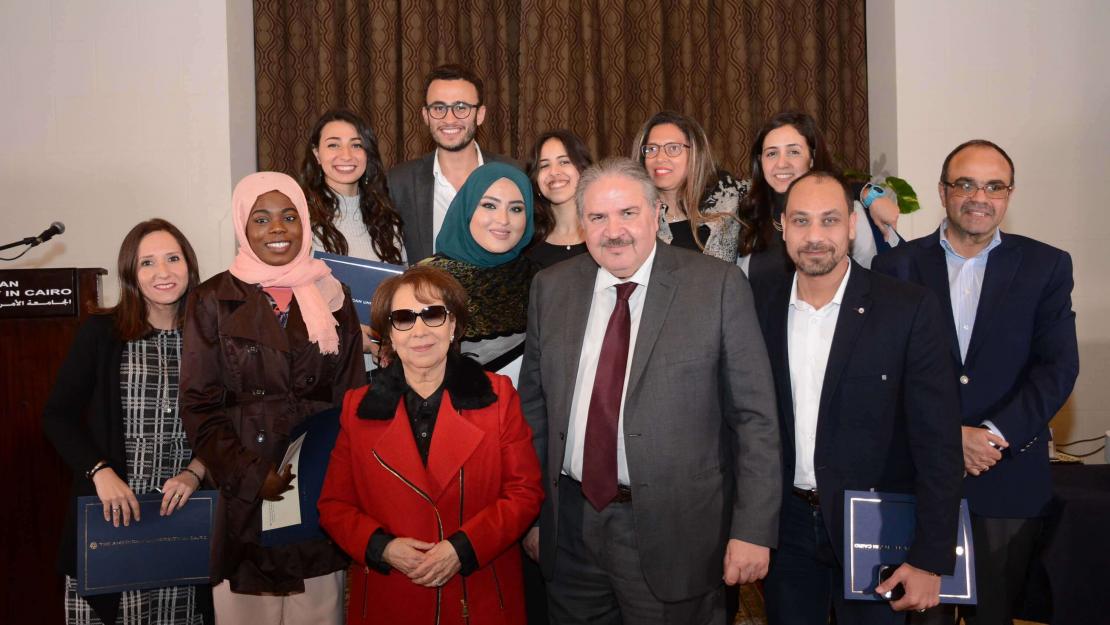 The Kamal Adham Center for Television and Digital Journalism, together with the Office of the Associate Provost for Research, Creativity and Innovation, hosted a screening of student documentaries about Egypt’s 1919 Revolution.

Instructed by Lena El Ghadban, adjunct instructor at the Kamal Adham Center for Television and Digital Journalism, students in the center’s documentary filmmaking course, produced two documentary films in commemoration of the Revolution's centennial, coinciding with AUC’s 100-year anniversary. The information-rich documentaries present a much needed video archive and documentation for the revolution. The screening was followed by a panel discussion with the night’s guest of honor, Enaam Mohamed Ali, renowned director and filmmaker. The panel also included students from the two groups that produced the films, and was moderated by the course instructor, El Ghadban, Hussein Amin, Director of the Kamal Adham Center, and Alaa Eldin Adris, Associate Provost for Research, Creativity and Innovation. Ali was presented with an award of appreciation of her efforts in providing the students with meaningful insights and constructive critique. Amin and Adris also recognized the students who made these two distinguished films. The screening was very well attended by the public and the media.

1- "1919 ... The Story" or 1919 ... الحكاية
This documentary retells the story of the 1919 Revolution through stories of real people who participated in it. The documentary features re-enactments of scenes depicting some of the key characters of the 1919 Revolution. The students tell the story of the revolution through the narration of a grandfather to his grandson.

2- "1919: The Art of Resistance to Occupation" or 1919 فن مقاومة الاحتلال
This documentary attempts to express how 1919 was an example of a revolution that had a great influence on the arts and culture of a nation, as well as how Egyptians expressed their voices through art (chants, songs, poems, theatre, cinema, etc.). The students document this era through art especially music and literature.