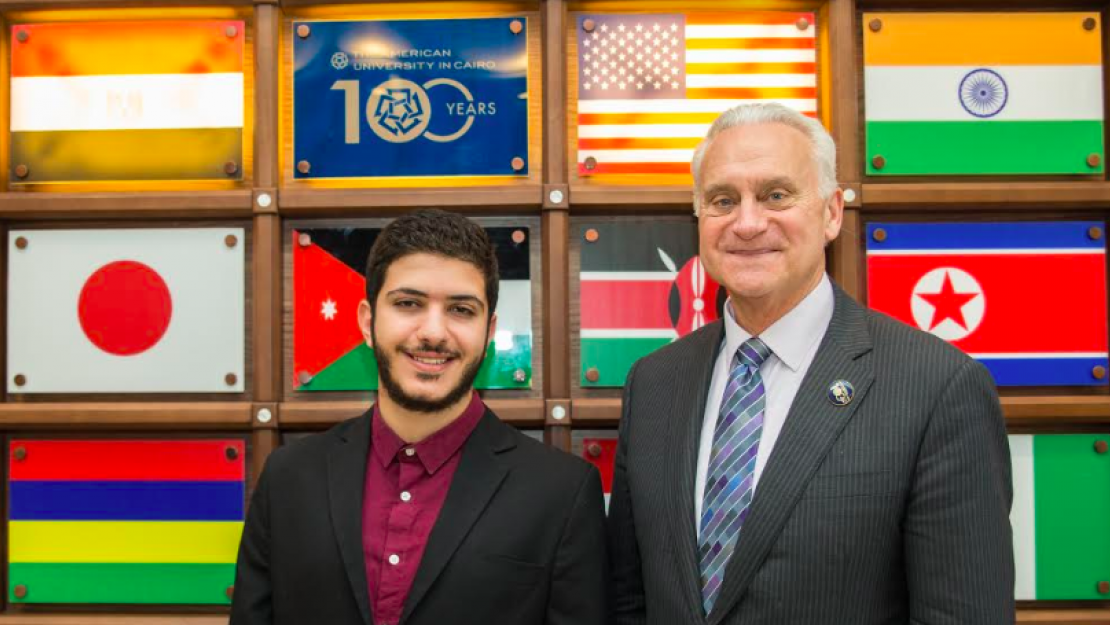 Serage Amatory, political science and multimedia journalism double major and recipient of the Tomorrow's Leaders Scholarship at AUC, was chosen to receive a fully funded scholarship to pursue his graduate studies at Stanford University as a member of the 2019 Knight-Hennessy Scholars program.

AUC is the only University in the Middle East that has representatives in this year's cohort of the program.

Amatory, from Barouk-Chouf, Lebanon, will pursue a master’s degree in international policy at the Stanford School of Humanities and Sciences after graduating from AUC this year. He aspires through changes to the educational system in Lebanon to promote a secular, equal opportunity and gender-neutral society there.

News@AUC spoke with Amatory to learn more about how AUC shaped his path to Stanford:

What was your path as an undergraduate at AUC like?

I chose AUC because of its location in Egypt, my strong urges to go somewhere new and grow independently. At AUC, I chose political science because of my fascination with power dynamics, the science of power and the big impact it has on every person in every aspect of his/her life. As for journalism, I found myself very passionate about storytelling and that I have a vehement fervor to take part in the usually marginalized struggles of some groups of people.

How has AUC influenced your academic studies and success?

Before I went for political science and journalism at AUC, I started taking classes in economics and business administration, believing that those were AUC’s best majors. I am thankful for AUC’s Core Curriculum that allowed me to make mistakes, experiment with different areas and, most importantly, find my most true passion at the end of the day.

AUC’s Career Center played a vital role in the Knight-Hennessy process. They offered all of the support, both emotional and professional, to applicants throughout the process. I personally would come to them every time I felt like I would never make it and would receive some pep-talk from Caroline Nassar, a great woman who never hesitated to help at any time and whose best asset is her genuineness and belief in the zeal of a freaking-out student.

What was your reaction to being selected as part of the Knight-Hennessy Scholars program? What does it mean to you?

The first time, I received an acceptance to attend the interview as a part of Immersion Weekend in Palo Alto, California. Only around 150 out of the entire applicants' population were qualified for that stage and seeing that my name was among them shocked me to my core.

I started jumping around — well, I am usually jumping in my everyday life, regardless — so imagine the extremity of my jumping that day. My three family members — my mom, my dad and my sister — all started jumping on our couch until we literally broke it in half.

The second decision, which was the final one, was meant to come on February 19. The day before, as I was grabbing a coffee on campus, I received an email from the co-founder of Knight-Hennessy, John Hennessy, who gave me a number to call. With shivering fingers, I called, while, of course, surrounded by friends, and he calmly delivered the news. I was trying to maintain a calm voice, but I am positive he could tell I was also jumping. I jumped so hard that day in front of HUSS plaza that I fell down and injured my finger.

I did not think I would react as much to the second decision compared to the first because your chances are higher once you have been selected for Immersion Weekend. But the fact that the decision came one day earlier and through the phone made everything different. I remember hearing Mr. Hennessy say I am the first person from Lebanon to join them, and then toward the end of our very brief call, I went back seeking reassurance: “So now what? Am I accepted?” He said yes, and I asked, “To both Stanford and Knight-Hennessy?” I then realized that was what he was talking about the entire call! After that, I remained in a state of elation and ecstasy until this very day.

What do you hope to achieve at Stanford? What are your goals beyond Stanford?

At Stanford, I hope to achieve what I exactly promised both Stanford and Knight-Hennessy: I will actively use my potential Stanford degree as a weapon in my fight for human rights — one which I have always fought with education and knowledge, but also one that I have haplessly fought with guns, hindered with silencers of governmental, institutional and popular oppression. I will use this indescribable opportunity to work harder and harder on the causes I not only stand up for but also live for.

Do you have a hero?

I am a firm believer that my main strength lies in my ability to appreciate anything. Hence, I do not have and never had one hero. I am, however, inspired to my very core by every heroic story that every one of us goes through. I know that everyone is fighting their own battles, and those fighters’ resilience, determination, successes and failures are my heroes. Even more specifically, the battles that children in general, and unprivileged children in particular, go through are what touch me and teach me the most.

This whole life-changing experience was easily going to be an eternal "What if?" I am so grateful to myself for deciding to apply to such a selective, world-leader university and such a competitive scholarship.

Please people, do everyone and yourselves a favor and go for your craziest, most unbelievable dreams. Do not settle and, most certainly, do not undermine yourselves and your potential. Dig deep in your heart. Find the wildest, most far-fetched of dreams and pursue them with faith, positivity, endurance, stamina and, above all, purpose. You can defy all odds.

I cannot end this without thanking from the bottom of my heart both Stanford and the Knight-Hennessy Scholars program for believing in me and giving me a chance to grow and work for what I claim is my whole life. I promise to use every platform and resource in order to fine-tune my voice, only to make it louder than ever.